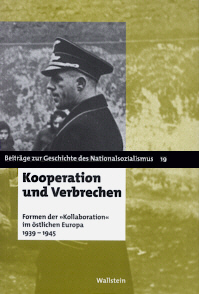 As demonstrated by the careful phrasing of the title: "Co-operation and crime: forms of 'collaboration' in Eastern Europe", the editors of this volume are keen to stress the many different layers of "collaboration". Relations with Nazi Germany could be on an individual, group or state level, and covered the fields of politics, economics, or even daily survival, as well as direct participation in Nazi crimes. The essays included here present a broad spectrum of co-operative situations for various Eastern European countries, showing also that the relationship was always open to renegotiation, as circumstances changed.

In choosing this topic the editors of the Beiträge have succeeded both in finding an important niche in the existing literature and also in capturing some of the more interesting research that is currently being done. The subject of "collaboration" has been generally neglected, especially in the German historiography, partly out of an understandable concern of German historians not to be seen as trying to spread the blame among countries that were also victims of Nazi aggression, occupation, and or economic exploitation.

Another important point is the opportunities the topic offers for comparative study, as many similar problems confronted the organizations and regimes that tried to deal with the Third Reich. In an insightful short introduction, the editors briefly outline their view that the term "collaboration" is now too pejorative to be of much use and tackle some of the main themes to be covered. These include references to the concept of an ethnic nationalism, which was common to most of Eastern Europe, and the necessary reliance of the Germans on local assistance to implement the Holocaust effectively.

For Ukraine, which still requires much work on the issues of the Holocaust and "collaboration", there are two contributions. Of these Tanja Penter's regional study of the Donetsk region is the more original, being based largely on a careful reading of Soviet post-war trials of local "collaborators", in the absence of significant collections of surviving wartime documentation. These sources reveal well the ambiguities of skilled mining officials who remained behind under German occupation; they were frustrated by Soviet policies of destruction that threatened the livelihood of their communities, and some worked with the Germans for material gain or out of resentment. The cautious broader conclusions drawn in the article also help to fill in the current large gap in the historiography for eastern Ukraine.

Frank Golczewski provides a more traditional survey of the issue of cooperation from the Ukrainian perspective. High initial expectations were soon dashed by German behavior, yet for many Ukrainians, forms of cooperation, such as service in the German police were still seen as the most promising option towards their goal of statehood. However, Golczewski's stress on the Germans as providing the leadership and framework for the Holocaust still does not explain the potent mix of motivations that caused Ukrainian local policemen to take a very active role in the killing.

Tim Cole's excellent essay on the circumstances in Hungary in 1944 demonstrates that on a local level not all initiatives came from the Germans, and he attempts also to come to grips with the variety of individual motivations. The increasing attention given to economic aspects of the Holocaust is reflected also in Katrin Reichelt's paper assessing the role of Latvians in the seizure of Jewish property. In a well-balanced piece, she examines the extensive involvement of the indigenous administration and population both in its registration and as beneficiaries. Nevertheless, she still stresses that the Germans firmly attempted to reserve the most valuable items for themselves.

Klaus-Peter Friedrich deals with the sensitive topic of Polish collaboration throughout the German occupation. He demonstrates that there were several fields in which German-Polish co-operation took place, usually on the basis of common enemies, for example, tactical alliances against both Jews and Communists. As he notes, the Underground state exploited positions within the administration to facilitate its activities, but could not always control anti-Jewish excesses. He summarizes recent research showing that Jedwabne was an extreme case, but not an isolated incident; there were other anti-Jewish excesses perpetrated by Poles, for instance, in Warsaw in the spring of 1940.

Tatjana Tönsmeyer's examination of the attitude of the Slovak elite towards co-operation with the Germans also reveals a complex relationship. While some German technical help was welcome, there was not a direct transfer of ideology. In particular, the eventual stopping of the deportations of Jews from Slovakia confirms the freedom of action the local authorities enjoyed. By exploiting the viewpoint of German advisors attempting to steer the path of co-operation, she is able to demonstrate considerable limitations to German influence, even close to the heart of Hitler's wartime empire.

Finally, the essay of Maria Hausleitner examines the combination of ethnic nationalism and geopolitical calculation, which lay behind Romania's diplomatic maneuvering in World War II. Although her findings are sharply critical of the apologetic historical trend predominant within post-communist Romania, they broadly reflect similar scholarship in the U.S. and Israel, which is now even finding some recognition in Romania, surprisingly within the framework of a government-backed commission on the Holocaust.

One can question whether it is quite so easy to dispose of the term "collaboration" completely, when examining relationships with Nazi Germany. Nevertheless, the concerted efforts of the authors to skirt around the myths of "collaboration" to get at the realities on the ground and in the minds of the actors have certainly born fruit. In particular, the volume includes a good selection of new approaches and regional studies, and makes them available to a wider audience. The interlacing of ideological, material and political themes in this book reflects the ability of scholars to embrace complexity and penetrate the dialectical nature of relationships even with Nazi Germany.