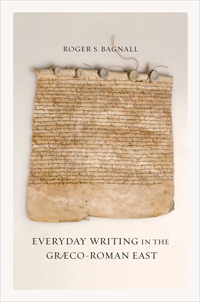 In our increasingly e-mailing, blogging and text-messaging culture, an in-depth study on the uses of everyday writing in the past invites a readership wider than that of specialists. Everyday Writing in the Graeco-Roman East offers food for thought on the unprecedented omnipresence of informal writing (or rather typing) in the modern world, while it makes an important contribution to the debate about literacy in antiquity. Bagnall argues firmly in favour of regarding the ubiquity of everyday writing in Egypt as the norm rather than the exception. Equally importantly, he builds a strong case against neglecting the archaeological context of textual evidence. The book also offers insights concerning bilingualism and the relation between spoken and written language(s). Its six chapters were delivered as Sather Classical Lectures at the University of California Berkeley. They preserve their discursive style, including a fair amount of humour. [1] In Bagnall's definition, "everyday writing" includes any form of casual and informal writing, that is, in addition to documentary texts, also those which we classify as literary or semi-literary, depending on their physical form and social usage (3). They are found on ostraca, papyri, parchment, tablets, and on plaster as graffiti. The last, arguably the meeting point of the disciplines of epigraphy, papyrology, and archaeology, provide one of the book's highlights: in chapter 1, Bagnall discusses a rare find made in 2003, of graffiti at the basement level of the basilica in the agora of Smyrna (7), dating from ca. 25 CE (22) to 178 CE when that part of the building apparently ceased to be frequented after an earthquake and subsequent rebuilding (8). In two of the four naves of the basement, a very large amount of plaster has been preserved on the walls, containing both drawings and texts (8). Among them are riddles (19), many healing inscriptions referring to eyes (19), the earliest letter square known in Greek (18), and a very early Christian text (23). Some clearly have been written over earlier graffiti, and some texts had been partly washed out in antiquity. The drawings include genitals (as do such groups found elsewhere), and drawings of ships whose deliberate positioning in the middle of available spaces suggests an intended audience (25). The walls had been repeatedly plastered, therefore Bagnall concludes that they were sufficiently public for someone to care about their appearance (24). The basement contained a spring (hence, presumably, the healing inscriptions) and had a ground-level entrance to the north, opening to the street (24). Some of the graffito writers were educated, but it is difficult to identify the lower boundary of their social range (25).

One of Bagnall's purposes is to "dethrone chance" in the discussion of the survival of documents, particularly those of the Hellenistic period (28). He does so in the second chapter by demonstrating that the documentation available for Ptolemaic Egypt is misleading about what was committed to writing in that society, and that everyday writing was no less common in Hellenistic than in Roman Egypt. Based on a survey of finds of archives outside Egypt, Bagnall argues that written documents were equally widespread elsewhere in the East, and were produced by both states and individuals (39-53).

Scholars often turn to documents of everyday writing in search of reliable data on social phenomena, among them slavery and bilingualism. Bagnall calls for caution. His discussion of the evidence for slavery from Hellenistic and Roman Egypt in the third chapter amounts to a strong warning against taking raw counts of documents as reliable indicators of long-term social change (73). It is a pity that the fourth chapter on Greek and Coptic in Late Antique Egypt is less concerned than the rest of this book with accessibility to non-specialists, because it is a useful case study on the nature and quality of bilingualism. Equally stimulating is the investigation in the next chapter of the relation between Greek and Syriac in the Roman Near East, a place where the archaeology of documentary finds is, as Bagnall argues, even more episodic than in Egypt (105). This chapter also discusses a group of more than 150 documents in Bactrian that have surfaced recently, dating from probably 267 to 868 CE (107). Bagnall concedes that we are far from a full understanding of the roles various languages played in the everyday lives of individuals under the Roman Empire (115; cf. 94), yet new and important evidence has come to light in the last twenty years (116).

The consequences of subjecting the archaeological context of textual evidence to close scrutiny are most obvious in the case of ostraca. Even the rather cursive survey of ostraca finds included in the last chapter of this book suffices to demonstrate plausibly that, until the arrival of paper (135), ostraca were likely to have been used very extensively as writing material for short texts with a short lifespan, both in Egypt and elsewhere in the Graeco-Roman East (133). The fact that far more texts have been found on papyrus than on ostraca is clearly a result of the excavation techniques of the late nineteenth and early twentieth centuries (121).

The strength of Bagnall's argument that writing was an integral part of everyday life in the Graeco-Roman East lies both on insightful observations about the archaeology of documents, and on the evidence he adduces for informal writing in languages other than Greek and Latin. It seems that many shades existed in between the opposite poles of words that "flew" because they were spoken, and such that "remained" because they were written down. For anyone interested in the circumstances, the users and the uses of ephemeral writing, this is a fascinating book.