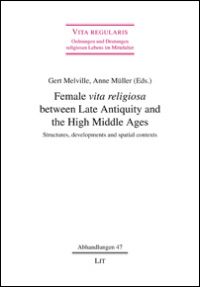 This collection opens with an essay by Jacques Delarun, painting female monasticism as a familial and local affair lacking in social or general interest (8), a view contradicted by (among other things) Giancarlo Andenna's discussion of the Lombard royal then Carolingian imperial house of San Salvatore of Brescia, and by Stefan Weinfurter's treatment of the veneration of Walpurga at the highest levels of Christian society. In fact, readers of the collection will discover abundant evidence for "female monasteries' profound cultural importance" (ix). It is required reading for anyone interested in the history of monasticism.

Starting from Claudia Rapp's vision of monastic beginnings in Egypt as "far richer and far more varied" (41) than the received view has allowed, readers of the collection will find little support for the conventional history of monasticism as a neat androcentric tale of the rise and periodic reform of Benedictine organizational forms. Among the plethora of organizational possibilities heretofore largely unnoticed, Rapp points to 89 (mostly) sixth-century hermitages (mostly) for paired monks at Naqlun (31). Furthermore, women participated in the exuberant monastic world of late antique Egypt in every conceivable way: as dedicated virgins in their own homes, as members of organized female communities, as solo hermits (some of them - "the desert mothers" - respected spiritual guides), as hermits "paired" with another woman or man, and as parts of loosely-knit Christian associations. Indeed, the keyword for the collection is the term "Wildwuchs" (44), used by Georg Jenal to evoke the enthusiasm with which female members of the leading families of the later Roman world embraced ascetic lifestyles. These powerful women were virgins and mothers, widows and grandmothers, living in their own homes and sometimes surrounded by a whole crew of like-minded women, whom they supported from their substantial personal wealth.

Jenal's discussion of late Roman elite female-led communities, which (with the exception of the house in Hippo associated with bishop Augustine) followed their leader rather than any written rule (60-61), prepares us to appreciate the immense variety of manifestations of the monastic impulse during the Merovingian era, as described by Anne-Marie Helvétius. During those centuries, monks and nuns continued to obey a succession of abbots and abbesses, rather than an unchanging rule (168); indeed, the very notion of a written rule was still quite ambiguous (153). Helvétius questions whether Caesarius's rule for nuns was actually used even at Arles, let alone more widely, or whether the late, interpolated manuscript witnesses of that rule on which scholars currently rely accurately represent what Caesarius originally wrote (157). Nevertheless, there were attempts to fashion usable rules. For instance, the regula cuiusdam ad virgines emerges from Albrecht Diem's discussion as a radical attempt to use monastic discipline to create "eine annähernd perfekte vita communis" (107). In this case, a women's community was the experimental field for ground-breaking practices (such as an emphasis on confession) that eventually became part of the glossary of monastic possibilities.

Essays by Katrinette Bodarwé, Hedwig Röckelein, Janet Burton, and Franz Felten continue the project of dismantling the history of monasticism conceptualized as a victory march of rule-centered Benedictinism (including in its reformed Cistercian form). Bodarwé's convent-by-convent demonstration of how women's communities in the ninth and tenth centuries did not "go Benedictine" in the wake of the reforms associated with Benedict of Aniane includes a detailed analysis of the manuscript evidence for attempts to adapt Benedict's rule for use by women. She demonstrates how each new adaptation re-invented the wheel, while none ever found a successful formula that could become standardized (269-270). Hardly any "rein benediktinische" women's communities are known, and many of the ones that might be placed on a list of "Benedictine" houses (such Vilich) actually followed a variety of rules (272). Röckelein also shows how the earlier stages (tenth and early eleventh centuries) of the Benedictine reform movements went "spurlos vorüber" most women's communities, many of which actively resisted attempts to incorporate them into the new organized networks and, when convinced to accept a regular reform, tended to embrace the rule of Augustine rather than of Benedict (303-304). Nevertheless, female religious were more involved in the later stages of the Benedictine reform movement (late eleventh and twelfth centuries) than has been recognized, albeit through a tremendous diversity of forms: in addition to formally regulated houses of female Benedictines, there were female hermits and small groups of recluses attached to male Benedictine houses, lay converts attached to female Benedictine houses, and a large number of double Benedictine houses (306-307). Similarly, Burton reveals how female Cistercians in England and Wales, unlike their male counterparts, rarely displayed purely Cistercian features; for instance, many drew their confessors and masters from the ranks of the friars or the parish clergy, or adopted a Gilbertine style of administration. This state of affairs was clearly related to the tendency of early male Cistercians to think of themselves as free from any responsibility for female houses, a preference that did not (as Franz Felten shows) survive the early decades of the thirteenth century, when the onslaught of women attracted to Cistercian forms caused the number of female religious considered as Cistercian to increase "wie die Sterne des Himmels" (414, and chart 404).

One contribution stands apart in its methods and chronological concerns, namely Fiona Griffiths' art historical exploration of liturgical textiles produced (or commissioned) by religious women between the twelfth and the fifteenth century. Although secular women also generously donated examples of their own or others' handiwork (including manuscripts and other ceremonial objects), Griffiths discerns a pattern in the donations of religious women, namely a preference for textiles intended for use at the altar and featuring iconographic programs that either highlighted women as liturgical actors, or underlined the centrality of women to salvation history. The author argues that nuns and canonesses, even when physically separated from the altar, "use[d] their textile gifts to reinforce their role as integral members of the church" (355), and "asserted their claim to the altar" (366).

More than anything else, what emerges from this volume is the rich variety and creativity of the female vita religiosa far beyond Benedictinism. After centuries of development, the Wildwuchs of Jenal's fourth-century Mediterranean was matched by the Bandbreite of Felten's transalpine High Middle Ages, when sanctae mulieres could live singly as hermits, as recluses associated with a church or a monastery, as members of women's communities loosely associated with a men's community, or as members of a legally constituted double monastery (396) - and all be considered in some sense "Cistercian."