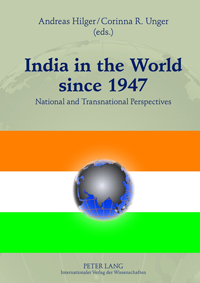 This book offers wide-ranging topics befitting India's diversity. It is grouped around identities, ideas, resources and power, four authors to each group. Editors Andreas Hilger of Helmut-Schmidt University Hamburg specializes on Soviet-South Asian relations while Corinna Unger, who teaches European History at Jacobs University Bremen, has published on development aid, exile, the Cold War and history of science. Topics span from secularism and nukes to the Delhi metro and town-planning in Chandigarh, besides the more conventional bilateral relations. William Gould discusses the touchy subject of the Muslims, Nicolas Blarel handles government's countermeasures to centrifugal forces, Manjeet S. Pardesi offers overview of relations with China and Southeast Asia, Sunil Bhatia and Anjali Ram tackle the Indian diaspora in the USA, while Amit Das Gupta looks at relations with Germany. In discussing the Delhi metro, for which 100,000 beggars were removed in 2010, Michael Mann overlooks that Kolkata was the first in India to open a metro service. Pardesi finds that Sino-Indian relations hit the pits since the 1962 border war and picked up only when Rajiv Gandhi visited China in 1988. Moscow since Gorbachev became more even-handed between India and China. Beijing opened two Tibetan sites to Hindu pilgrims; a Joint Working Group was set up to address the border problem. India's interventions in Sri Lanka and the Maldives established her also as a regional power besides China. The potential for regional rivalry between the two should have been explored more. Also, bilateral relations should have been brought up to date in an otherwise cogent analysis.

Gould points to the dilemmas of the 160 million-strong Indian Muslims created by the conflict of tradition and modernity. However, the government has accommodated the minority in many ways. Fundamentalism or attraction for Pakistan remains peripheral among them at best, observes the author. Turning to the Indian diaspora in America, one finds that the first Indian immigrants to the US were rural Sikhs who migrated to the West Coast in the early 19th century. Prejudice was rampant against them. The Immigration Act of 1965 changed that. Skilled workers were welcomed. Indians became prominent in a wide variety of professions in the USA. It may be noted that motels in the US are sometimes called 'Potels' because a large number of these is run by Gujrati Patels. Missing, however, is a discussion of the dilemmas faced by the first generation Indian immigrants in bringing up their children in an American milieu. US values often widely differ from Indian ones, e.g. teenage dating.

Regarding relations with post-war Germany, Das Gupta says that Bonn was initially cool towards India's nonalignment. This is understandable given the widely different experiences of the West and India with the USSR and Nehru's proclivity to tilt to socialism - though of the British Fabian, rather than the Soviet Marxist variety. Despite his differences with Adenauer, Nehru's India officially recognized Bonn, not East Berlin, soon after gaining independence. But Das Gupta perhaps mistakes nonalignment as neutrality. This has been a familiar mistake in the West blinded by the Cold War. Nonalignment permitted even partisan stand given that the term meant India reserved the right to judge issues independent of the two Cold War camps. This otherwise searching analysis points out that Delhi opened trade relations also with East Germany as early as 1954. However, Erhard's advice to promote private business hardly fell on "fruitful ground", unlike the author observes. That only happened in the 1990s. Delhi was also upset by Bonn's military aid to Pakistan. It finally recognized the GDR in 1972 only after an inter-German modus vivendi had been achieved. Ex-Premier Rajiv Gandhi then boosted the somewhat stagnant relation with Bonn. In conclusion of his insightful piece Das Gupta compares inter-German relations with Indo-Pak relations. It seems to him that bilateral cooperation between Delhi and Islamabad is possible, esp. given current favourable trends. He feels India may even accept the status quo on borders like the FRG (Willy Brandt had set the ball rolling with his Ostpolitik in the 1970s; Helmut Kohl put the final seal on the borders question during the Wende or reunification too decades later). West Germany's economic power attracted East Germans; India's attract Pakistanis. However, the parallel seems to end there. Germany had been divided against its will. But Indo-Pak relations have a loaded history of animosity. Unlike in the German case, there is as yet little exchange of visits, trade, etc. despite the South Asian Association for Regional Cooperation (SAARC). So the author is pessimistic about the South Asian divide and finds "no end in sight".

The volume, despite a few caveats, is a valuable contribution to understanding today's India. The editors wisely admit that the future of a rejuvenated India remains open. Short of crystal ball-gazing, the book provides an insightful picture of the modern India that is not only a regional power but also endowed with the aspirations and capacity for reaching out to a global status.