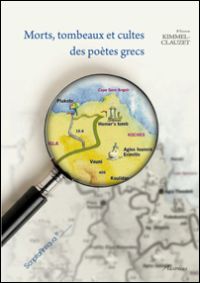 The book is based on the author's 2008 doctoral dissertation, and focuses on the relationship between poets of the archaic and classical period and their later admirers, as established through biographical accounts of the poets' deaths, burials and funerary honours, and the establishment of their cults (9). It considers seven ancient Greek poets: Homer, Hesiod, Archilochos, Pindar, Aeschylus, Sophocles, and Euripides. The introduction (9-32) sets out the literary and material evidence used, and outlines the approach adopted: Kimmel-Clauzet rightly stresses that the context of the production of the ancient sources deserves special attention. By aiming to make "une analyse des mentalités" (29), the book joins a recent movement in criticism which considers the reception of ancient Greek poets and their work, as expressed through biographical narratives and material culture. This basic approach emerges well, for example, in the study of the account of Pindar's death as Libanius recounts it (69-73): by reading Libanius' testimony against its own fourth-century cultural background, Kimmel-Clauzet suggests that biographical anecdotes and Libanius' own living experience converge in the account of Pindar's death.

Interrogating the biographical material in order to understand what it meant to admirers of the ancient poets is only the first task of the volume. In addition, the author intends to distinguish between biographical invention and historical facts. As explained in the introduction, the details given in the biographical accounts are categorized throughout the book as "true, fictional, or plausible" (30). It is in fact impossible, and Kimmel-Clauzet occasionally admits this, to prove the historical reliability of the biographical traditions. For example, there is no way of knowing anything for certain about the position of the tomb of Pindar, nor about its original date, as the author admits after a comprehensive discussion of various sources (147-8); nor is there any possibility of determining with certainty whether and when Hesiod's bones were moved to Orchomenos (138-9). Kimmel-Clauzet's long and detailed analyses of sources generally end in aporia - which prompts the question whether the search for factual information about the poets was misguided in the first place.

The book is divided into two main sections. The first (33-282) discusses, in three individual chapters, each topic mentioned in the title: "morts, tombeaux et cultes des poètes grecs". The first chapter (33-120) is devoted to studying how narratives of deaths and other biographical anecdotes shaped ancient poets as extraordinary figures ("hommes d'exception", 104, cf. 31). In the second chapter (121-84) the author first considers the representations of funerals and tombs of poets, and then devotes a section to funerary epigrams. The third chapter (185-271) includes an analysis of the cult for poets - it is useful to specify here that the author defines the term "cult" very broadly, collecting a wide range of evidence, from attestations of actual religious honours paid to poets, to private forms of admiration. The second section of the book (283-428) offers a handy collection of ancient sources, texts and images, in four appendices, including one with testimonia for poets other than those on which the book focuses.

It seems necessary to note that a discontinuous and, at times, superficial engagement with previous scholarship, occasionally leads to conclusions which do not offer substantial new contributions to the topic. For example, the book repeatedly underlines the central - and by now largely accepted - notion that the work of the poet influences biographical accounts, closely following M. Lefkowitz's important work. [1] The volume also touches on the cults of poets, lingering on details which have already been identified and fully discussed by D. Clay (from lexical observations to more general aspects, such as the relationship between cults and biographies). [2] Lastly, the author does not seem aware that J. Hanink has already, and more exhaustively, identified the presence of a Macedonian influence on Euripides' biographical tradition. [3]

Aside from these bibliographical quibbles, the main weakness of the book is the insistent and yet doomed attempt to rescue fact from fiction. Scholars by now agree that the biographies of the ancient poets are fictional, and see them as a mode of creative reception. [4] Discussing the historicity of the biographical "facts" sometimes leads to the dismissal of anecdotes which actually constitute important evidence; for example, it is of little use to ascertain that certain details of a version of Hesiod's death transmitted by a papyrus (49) are "unreliable": what matters and needs to be understood is, instead, why and how ancient admirers of Hesiod cared about such details. Similarly, a papyrus from Saqqara tells us nothing about the house of Pindar (230-1) but does show that Pindar was presented as a priestly figure.

The main strength of this book is its inclusiveness: as a collection of material it works well, and can inspire further work on how people related to poets in antiquity. Thus, for instance, the book may inspire further reflections on the relationship between biographical traditions concerning Homer and his depiction on coins (214-17). Again, the civic role of poets could usefully be investigated by taking into account their posthumous cults. Finally, some of the traditions this book discusses (e.g. concerning the cave in Smyrna where Homer allegedly wrote his poems, 207) could lead to a better understanding of the role played by landscape in the creation of the poet's Lives. Kimmel-Clauzet's book is the result of pain-staking work. Although it suffers from lack of critical engagement with current work in the field, it collects a useful range of sources, and offers several useful observations about them. The book may, therefore, inspire further work on the connection between poets, people, and places - as encapsulated by the tomb.

[1] Lefkowitz, M.R.: The Lives of the Greek Poets, London 2012 (1981). Kimmel-Clauzet does not include in her bibliography the revised edition of Lefkowitz's work, which does engage with the rapidly evolving field of biographical studies.

[4] Poetic biographies have been first treated as a mode of reception by Graziosi, B.: Inventing Homer. The Early Reception of Epic, Cambridge 2002. The scholar shows here why no biographical tradition should be disregarded on account of its fictionality. B. Graziosi currently directs the ERC funded project Living Poets: A New Approach to Ancient Poetry: "the aim of this project is to develop a new approach to classical poetry, based on how listeners and readers imagined the Greek and Roman poets" (http://livingpoets.dur.ac.uk/).