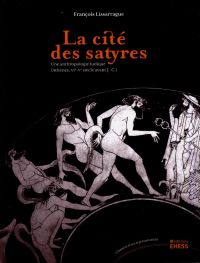 Despite their poor reputation, satyrs are a serious business. Their servitude to the Greek god Dionysos (Roman Bacchus) connects them intimately with both wine and drama; their hybrid form elides them behaviorally and visually with Pan and the centaurs. La Cité des satyrs embodies the culmination of François Lissarrague's many years of research on these half-human, half-equine creatures in Greek vase-painting. The result is a highly readable account written in a pleasing narrative style. The author tells the complex and dynamic story of satyrs through images ("dans ce voyage au pays des satyres ...", 18) rather than simply presenting them as an iconographic summary. A total of 210 photographs and drawings, including some in colour, punctuate the discussion and guide the reader throughout. Nearly all represent Athenian black- and red-figure vases, the primary surviving art form belonging to the time and place of the book's purview.

Although Lissarrague, his predecessors (e.g. Kerényi), and some of his contemporaries (e.g. Hedreen, Isler-Kerényi) have dealt with particular or individual aspects of satyrs on vases, this book is the first to tackle their iconography and role in Athenian life drawing on such a wide assortment of visual evidence. Using literary texts as the necessary backdrop, the subject of satyrs in 6 th and 5 th century Athens is approached by theme. Following a brief introduction that touches on post-classical reception as well as some important insights about the lack of a true genealogy for these creatures, readers are swept rapidly in to the world of the satyr. This is "l'univers" that confronts otherness and obscenity, the unconventional and unrestrained. As indicated by the book's subtitle, 'une anthropologie ludique', the author unites two concepts that serve both him and his satyrs well. An anthropological approach has in many ways defined previous scholarship on Greek vases by Lissarrague, as well as by other Francophone scholars working in the intellectual tradition of Louis Gernet. The 'ludic' seems a timely and logical next step in our unwavering curiosity about satyrs and their god in drama, art, and myth. The combination of these methods dovetails nicely with other recent studies focused on visual humor and vases. [1]

The core chapters of the book reveal at once the vast array of images available and the possible implications of portraying satyrs on Athenian vases. The chapters are broadly defined by the following areas: drama (esp. satyr play), terminology (i.e. satyrs versus silens; maenads versus nymphs), anatomy and the body, sexuality, animals, wine, music and dance, war, city life, and the gods. Each of these is presented as an independent conversation complemented by carefully chosen illustrations, and as such, can be read either on its own or in combination. As is the case with any thematic presentation, there is a certain amount of overlap between the parts, especially when one accepts that a single image could have multiple meanings and as many ancient viewers. This tale, however, is carefully woven. Because they permeate so much of the iconography, relevant religious festivals and different kinds of performance appear in relation to other discussions, as do for example symposia and parodies.

Like his past scholarship, Lissarrague asserts that the figure-decorated vases of Athens inhabited the all-male symposion, and that the participants in this exclusive event were the main consumers of the images. In his assessment, satyr depictions are uniquely relevant: "Sur les vases se déploie un jeu reflexif sur les catégories de la culture qui concernent les hommes, en premier lieu les éléments mêmes du banquet: le vin, la musique, l'érotique, mais aussi plus largement les éléments de la vie masculine, la guerre, le vie religieuse et rituelle, le rapport aux dieux" (244). Such a perspective is limited by its reliance on the textual tradition, and is not totally supported by the surviving archaeological evidence. The growing concern for the exact find-spot of each and every vessel has turned scholarship towards context and away from function. Inevitably, this makes problems for the vases, their decoration, and for us. How do we account for all those Athenian imports in Etruscan tombs, or indeed for those found in the Greek cities of Magna Graecia, or even those from the sanctuaries and cemeteries of nearby Corinth? Such questions loom against the backdrop of claims that Athenian vases reflect local social significance or home-grown psychological concerns. Vases travelled and so did their images.

The book is small, yet beautifully produced. Footnotes are not extensive and many simply lead the reader to Beazley's lists and/or the Beazley Archive Database number, and a primary publication of the example in question. A series of appendices complete the package. These take the form of groups of vases listed according to 26 iconographic categories of a more detailed and eclectic variety than the chapter headings themselves (e.g. 'satyres se masturbant (dephomenoi)', 'satyres au pressoir', satyre à cheval ou couchés sur un askos'). This is a rather elegant, if non-conventional, solution to handling such a large amount of data, even if it feels somewhat artificial. The reader is assumed to have knowledge of Classical art and literature, but the audience is not a narrowly academic one. It is easy to imagine a non-specialist with an interest in ancient myth, drama, or cult finding much of interest and novelty here. The same might be said regarding the choice of figures: some will be immediately familiar (e.g. François Vase's Return of Hephaistos, fig. 106; Amasis Painter's satyr's making wine, fig. 109), while others may be less so (e.g. satyr offering drink to a mule, fig. 86; satyr as kitharode to the gods, fig. 130).

As is often the case with books about Greek vases, objects and images produced outside the city of Athens (e.g. Boeotia, Corinth, Laconia) have been excluded. Several enigmatic examples that are applicable here readily spring to mind: Laconian cups of the 6th century thought to show the Capture of Silenos, or the Boeotian black-figure cup in Hamburg with its lanky satyrs whose phalloi are as long as their tails. [2] Irrespective of this minor quibble, François Lissarrague may easily be counted as one of the most influential vase-painting scholars of his generation. His distinctive style of both thinking and expression weaves together years of patient research - on warriors, banquets, shield devices, and ritual, - an enduring love of Athenian vases, and an insatiable appetite for all things satyr. It seems he will never tire of asking or answering "pourquoi les satyres sont bon à montrer" (37).