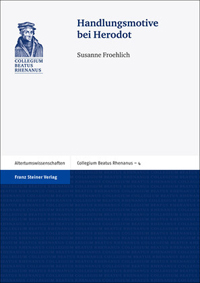 Herodotus rounds off the proem of the Histories with the objective of finding out 'for which reason' (di' hēn aitiēn) the Greeks and Persians went to war against one another. As a historian he does not content himself with the mere recording of events, but considers a structural study of their origins imperative for his undertaking to succeed. The search for the motives that drive the historical agents whom he stages in his work therefore plays a crucial role in his historiography. As Susanne Froehlich demonstrates in her well-documented monograph, Herodotus has thematised motivation in his work on an unprecedented scale and emerges as an analytic thinker more akin to Thucydides and Aristotle than to his predecessors.

Froehlich's book ties in with recent studies that seek to place the Histories within the vibrant intellectual debate in Greece in the second half of the fifth century BCE. [1] She avoids traditional Quellenforschung and the search for the historicity of Herodotus' account and instead focuses on the way in which the historian presents and interprets his material, considering his work testimony of what Gehrke has termed intentional history (intentionale Geschichte), i.e. a description of the past as viewed, remembered, judged and cultivated by a group with an eye on the construct and conceptualisation of their collective identity (17-18). [2] Furthermore she follows Baragwanath in her argument that Herodotus uses narrative rather than abstract terminology to bring across complex and shifting sets of motivation and thereby seeks to engage his readers in the interpretative exercise (117, 161-162). [3]

Froehlich's point of departure is a comprehensive overview of motives that Herodotus explicitly mentions (35-83; 189-193). This empirical approach has the advantage of bringing to light the diversity of motives that Herodotus ascribes to his characters. In total she distinguishing no fewer than 52 motives, which she ranges under categories from which they originate. These are (1) the emotions and characters of the historical agents, (2) cultural demands, (3) the political situation, (4) economic, (5) aesthetic and (6) religious demands and (7) factors that fall beyond the power of the agents themselves, such as emergency situations that beg for an immediate response. [4]

An important result of Froehlich's overview is that it disqualifies the common view that motivation in the Histories is predominantly entwined with the personalities of the individuals staged in the narrative. Cultural and political motives abound to a similar extent, which places Herodotus firmly in Thucydides' league, who elaborates and refines, but not conspicuously alters his predecessor's explanatory scheme (169-180). Another advantage of Froehlich's detailed typology is its specific attention to less canonical stories of the Histories. Examples are Sethos' kingship in Egypt (2.141, 75) or the events that lead to the foundation of Hyele (1.164-167, 123-124), which Froehlich discusses in her second chapter on Herodotus' explanatory schemes (85-134). Stories like these do not often feature in Herodotean scholarship, which tends to focus on the more prominent accounts of the Eastern kings and their engagements with the Greeks.

Froehlich's typology would have benefited from a more pertinent distinction in narrative levels so as to do justice to the Histories' polyphonous nature. As Baragwanath (see note 3) argues, it is the interplay between motives that Herodotus mentions himself in his narrative and those that he ascribes to his sources or makes his characters voice in their speeches that engages his readers in his historiographical enterprise. A typical example where a narratological distinction is useful is the discussion of the aesthetic motive of the 'literary genre' (66-67), which functions on the level of the author and his sources and is not related to the characters. Furthermore, one may question the benefit of Froehlich's approach to classify particular motives in mutually exclusive categories. Fear and anger are classed under motives that stem from the emotions and characters of historical agents, but there are plenty cases where other elements are in play. Cyrus' fear of the Lydian cavalry, for instance (1.80.2) does not stem from his character or emotions, but from tactical military considerations. In the same vein it is the ambivalent diplomacy of the Ionians at the time of his war against Croesus that explains Cyrus' anger (1.141.4).

Froehlich's approach works particularly fruitful when she compares Herodotus' attribution and distribution of motives in the case of different groups of characters (85-108). Ethnicity, for instance, hardly seems to make a difference in terms of types of motivation, which ties in with Herodotus' deliberate strategy to deconstruct a Greek-barbarian polarity that may have been popular in his time. [5] Neither is there a noteworthy distinction in motivation concerning individuals or groups. Gender however emerges as an issue, as the deeds of women are more commonly motivated by emotions, often related to their position as protectors of their families. More problematic is the difference in motivation between characters from recent and more distant periods of history. Froehlich's comparison between the Egypt book 2 and the narrative of Xerxes' invasion in book 7 leads to the observation that in the latter political circumstances and advisers play a more prominent role in motivation. The Egypt book is exceptional however, both in the way in which Herodotus presents his source-material and in the anecdotal organisation of the narrative of the Egyptian kings (2.99-182). Book 1, with its more extensive narratives of Croesus and Cyrus, offers itself as a more suitable object of comparison.

A final point of discussion concerns Froehlich's interpretation of Herodotus' Xerxes, to whom she dedicates a separate chapter (135-148). Xerxes, as Froehlich points out, is the most complex character in the Histories, and Herodotus uses his entire arsenal of motives to explain the king's behaviour. This often comes across as volatile and incongruous, for instance in the alternation of excessive praise and gruesome punishment of benefactors like Pythius (7.27-29; 7.38-39) and the captain of the ship that ferried him safely away from Greece (8.118). In relation to the most elaborate scene of the Histories, the council in which Xerxes announces his plan to invade Greece (7.1-19), Froehlich challenges the view that Xerxes is carried away by emotions and argues that his motives should be understood as part of a thoroughly rational and inevitable decision. This remains difficult to reconcile with Xerxes' rebuke of Artabanus, which is motivated by anger (7.11.1), for which Xerxes later privately offers his young age as excuse (7.12.2). Similarly, the king's garbled attempt to create a democratic platform for his decision at the end of his opening speech (7.8δ2) gives relief to his character as it seems driven by uncertainty about the best way to manifest his power. The council-scene as a whole should be seen as programmatic in the sense that aspects of Xerxes' volatile character are introduced and explained from his troublesome and threatened personal situation after a disputed accession.

The points of debate raised above should not distract us from the general value of Froehlich's work, which deserves praise for its academic rigour, its systematic analysis and its originality in methods of comparison. Especially this last aspect allows Froehlich to successfully challenge commonly held views about Herodotus' premises in portraying his characters and about his position within the 5th century BCE intellectual community. This book will serve as an important stepping-stone for those who will continue to explore the ways in which Herodotus presents the past.

[5] For this aspect of the Histories see Munson, R., Telling Wonders: Ethnographic and Political Discourse in the Work of Herodotus (Ann Arbor, 2001) and Pelling, C.B.R., 'East is East and West is West - Or Are They? National Stereotyping in Herodotus', in: Oxford Readings in Classical Studies, vol. 2, ed. R. Munson (Oxford, 2013), 360-380.