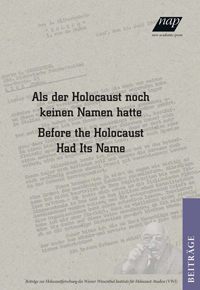 Before the Holocaust Had its Name. Early Confrontations of the Nazi Mass Murder of the Jews is a volume which emerged from the 2012 workshop on early documentation of the Holocaust held at the Wiener Wiesenthal Institute für Holocaust Studien in Vienna. It is an important contribution and adds a new perspective to a rapidly expanding field of Jewish studies confronting the myth of silence surrounding the Holocaust in the wartime and immediate postwar period. As the volume clearly demonstrates, survivors, and often also those around them, wanted to and did speak about the Holocaust. As Hesia Diner writes in her article this was not a "Generation of Silence", but rather people who "did what they believed they had to do, and what circumstances allowed them to. As they saw, they could do no less, but they also could do no more." (147)

The number of studies forming this volume shows how diverse this generational response was. One of the greatest strengths of the book is that the wide scope of contributions allows for a truly comparative perspective. It discusses cases of institutional and individual attempts to document and publicly speak of the Holocaust, both on national and transnational level. Authors of the articles, tracing individuals' involvement in various collective and personal documentation efforts, show the dynamics of change in their perception of the Holocaust, both in relations to time and to social and political boundaries.

This notion is encapsulated in Natalia Aleksiun's article entitled "An Invisible Web. Philip Friedman and the Network of Holocaust Research". In her study, Aleksiun discusses an informal network of Jewish historians, witnesses, collectors and educators created first in Poland, then Germany and finally in New York by the Polish-Jewish historian Philip Friedman. By analyzing letters exchanged by Friedman with the most notable scholars of the Holocaust in Eastern Europe, Israel and the United States, Aleksiun clearly shows the informal aspect of the formation (and transformation) of early scholarly research on the Holocaust: "setting up agendas for research, influencing the methodology of historical work and reflecting on challenges of working in the new field of inquiry" (165). Following closely the migration paths of European Jewry in the immediate postwar years, the study underlines the cooperation of individuals and research centers in the early documentation and commemoration of the Holocaust.

Another strength of the volume lies in putting Jewish documentation projects in the context of contemporary non-Jewish scholarship. One of the studies of early integrated historical projects is Katherine Lebow's rich and perceptive study of Halina Krahelska's Warsaw chronicle, which should more aptly be referred to as a documentation project, covering the period between 1939 and 1942. Krahelska was a sociologist by training, who during the war worked for the underground archive and historical bureau of the Polish Home Army. Her extremely detailed account is exceptional in the way in which it incorporates and comments on voices and perspectives of both Polish and Jewish attitudes towards the first stages of the Holocaust in occupied Poland. The chronicle includes excerpts from conversations and informant's accounts as well as transcribed reports, leaflets and newspaper articles. Krahelska's work, a study of ordinary Polish and Jewish life in the shadow of the Holocaust, is dubbed by Lebow as the Polish equivalent of Emanuel Ringelblum's documentation project The Underground Archive of the Warsaw ghetto. As she concludes: "The methodological impulses behind Krahelska's documentation work were similar [to Ringelblum's], drawing on two decades of innovations in literature, scholarship, and activism. When the unthinkable came to pass, Krahelska and Ringelblum, motivated by shared ethos of rigor and engagement, put those innovations to work in documenting the terror around them" (110).

While the above two articles demonstrate the role of individuals in shaping the early, largely experimental, historiography of the Holocaust, the volume also contains several strong studies of institutional initiatives in documenting and commemorating the Holocaust. These include Laura Jockusch's comprehensive discussion of the Jewish Historical Commissions and Documentation Centers in the Aftermath of the Second World War and Elisabeth Gallas' study of the Commission on European Jewish Cultural Reconstruction, a key organization in the United States which dealt with the preservation and commemoration of Jewish cultural heritage in postwar Europe. Yet, as other studies demonstrate, the work undertaken was not just limited to the most important research centers. Articles looking at lesser known early attempts at commemoration include Máté Zombory's study of a small publishing house in postwar Hungary, Anika Binsch's article on Holocaust-related publications in American occupied Germany or Peter Hallama's analysis of the early historiography of Theresienstadt in postwar Czechoslovakia. Putting those articles on seemingly scattered topics side by side demonstrates how much more potential there is in pursuing further contextualized local case studies. The volume encourages further research on the international context of these initiatives, both in terms of cooperation of various organizations, and the circulation of knowledge between survivor-historians themselves.