Seth A. Johnston: How NATO Adapts. Strategy and Organization in the Atlantic Alliance since 1950, Baltimore / London: The Johns Hopkins University Press 2017 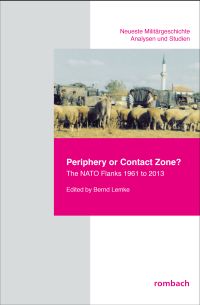 Recent events have put the borders of the North Atlantic Treaty Organization in sharp profile again. Russia's Crimean annexation and civil strife in Ukraine rekindled fears especially in NATO's eastern members states and have led to a quasi-Cold War 2.0. South of Turkey, the Syrian Civil War and the Da'esh "califate" create repercussions in Europe through terrorist attacks and the "refugee crisis." These developments serve as a fitting contemporary background to the edited volume "Periphery or Contact Zone? The NATO Flanks 1961 to 2013".

The focus on NATO during the Cold War has been, and often still is, on the Central Region in divided Germany as the possible battleground of World War III. [1] The volume under review wants to redress this. Built on a 2013 workshop by the Bundeswehr Center of Military History, the articles range geographically from northern Europe to southwestern Asia and chronologically from 1949 to 2014. The goal is to comparatively show the (dis)continuities during that time span and thereby reflect on the changing mission of NATO as well as on how the "periphery" can have a very real impact on the "center(s)".

After the introduction, editor Bernd Lemke provides a short historical overview of NATO strategy from 1949 to 2014. Avid scholars of the Atlantic Alliance will not find anything new here, but this chapter is a very helpful starting point for the NATO neophyte.

Concerning the Northern Flank, Agilolf Kesselring delineates the special role of the "Nordic Balance" and the different security goals of Norway, Denmark, Sweden, and Finland during the Cold War. While the latter two embarked upon a course of "neutrality", the former two joined NATO, but not without reservations. Their experience of World War II had shown the need for a defense which could only to be attained in an alliance, but they refused the stationing of allied troops and nuclear weapons on their soil. This complicated NATO war planning, where geography and thereby access to and control of the Atlantic and the Baltic played a strategically important role. The "high North," as Gjert Lage Dyndal calls it in his article, also served as a travel route for nuclear bombers and missiles. With the change from massive retaliation to flexible response and the renewed emphasis on conventional warfare, the Northern Flank became less disconnected from the Central Region.

Gökhan Özkan elaborates on Turkey and the Southeastern Flank. Possibly the most contentious issue was the dispute with Greece over Cyprus, which Stefan Maximilian Brenner focuses upon. A recurring shooting conflict between two factual allies, it was one of NATO's 1960s crises, threatening the North Atlantic Treaty Organization's credibility vis-à-vis the Warsaw Pact and forced the other members to find solutions, complicated by the military coups in Athens and Ankara. A split into an idealistic (BENELUX and Scandinavia) and a pragmatist camp (FRG, USA, and UK) among NATO members occurred. As Dionysios Chourchoulis writes, this was also a problem when, after the change to flexible response and forward defense with the need for conventional force modernization, the idealist camp was unwilling to provide economic and military aid to Greece and Turkey. This shows that the Cold War meant not only "East" versus "West" but more often than not intra-bloc conflicts that could actually turn into hot war threatening the very foundation of the Atlantic Alliance. Moreover, events on one flank (politically) impacted other flanks as well as the centers of NATO power.

Italy often took the role of mediator between different interests on the Southern Flank. With its location on the Mediterranean, it faced not only the communist Balkans but North Africa as well. While most NATO members focused on Central Europe, Gaetano La Nave explains how Italy showed the importance of also taking the opposite coast into consideration. This was especially evident during the Conference for Security and Cooperation in Europe, as Francesca Zilio shows. Here, small Malta irritated larger Western countries by its wish to also incorporate North Africa in the CSCE-a case of the tail wagging the dog. But while playing an important diplomatic role, Italy suffered from domestic issues and economic distress that hindered the modernization of its forces on the Southern Flank.

Michael Schmid illustrates the never-ending clash of national and alliance interests. The 1973 October War had shown U.S. reliance on Middle Eastern oil. Fearing the next global conflict could emanate from Southwest Asia, U.S. administrations devised interventionist strategies. This meant taking G.I.s from Europe and putting American credibility with its European allies at stake once more after Vietnam. But the events of 1979 necessitated securing U.S. interests, leading to the 1980 "Carter Doctrine" and being effectively prepared for the 1991 Gulf War. Addressing the post-Cold War world, Hans-Peter Kriemann illustrates NATO's mission change and Germany's role in the 1998-1999 Kosovo conflict. NATO went from a defensive to an interventionist "out-of-area" alliance which showed the problems of political decision-making among sovereign democratic states. Still, NATO learned how to deal with events such as 9/11. Both articles could have elaborated more on the "periphery" as catalysts for NATO's strategy change, though.

Crisis management is also at the heart of Harald van Nes's article on the Live Oak organization. Its geographic subject-West Berlin-was not really on NATO's "periphery" but rather central to a possible Third World War. Recent events have shown how a "periphery" can turn into such a hotspot when it comes to the Baltic. Augustine Meaher presents NATO's Baltic member states as a multifaceted contact zone: between eastern and western Europe, between Russia and NATO, and as part of the Baltic-Scandinavian region. The Balts see themselves on the frontline and try to convince the rest of their allies as such.

There are a few detriments to the volume. Aside from some small mistakes ("Secretary of State McNamara", 21), the English translations of the texts sometimes use slightly off terms and sound too "German" now and then. Because geography plays an important role, it is very unfortunate that there is no register of places. But the maps on the book's endpapers are a great aid to localize the events written about in the articles. Often starting with a short introduction to the respective historical contexts, the contributors, whose approaches range from military to diplomatic history, help uninitiated readers to orientate themselves. And the extensive footnotes of the articles provide a great overview of sources and research literature from different countries.

All in all, the book succeeds at delineating how NATO's mission and strategy have changed during and after the Cold War as well as showing (dis-)continuities and especially similarities. Rather than juxtaposing "peripheries" and "centers," their interconnectedness is highlighted. Typical for the Cold War was NATO's planning for contingencies and the ever-present fear of escalation to World War III. In the post-Cold war era, NATO had to redefine its mission and goals. The "flanks" were never a periphery, and today, they have actually become a - if not the - main focus. At all times the problems of NATO as an alliance of various members with often differing national interests and the need to reach consensus for joint strategy and action have been present. NATO's flanks are therefore definitely a contact zone, as this volume as a worthy contribution to the study of NATO shows.