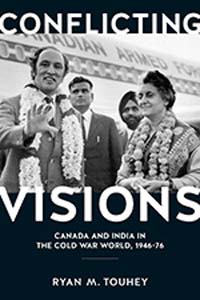 For most scholars of Cold War history, Canada does not deserve much attention. Though being a member of NATO and taking care for renaming the World Economic Summits into G 7 by 1976, the country has allegedly mostly been slipstreaming behind the United States or acted as a not too influential member of the not too relevant British Commonwealth. Even Canada's truly important role in cooperation with developing countries - the only industrialized western nation offering grants right from the start - has not been awarded as much attention as it deserves.

By investigating the relations of a seemingly less important member of the Western camp with the leading non-aligned country, Ryan M. Touhey has opened a new chapter. That far - if at all - the bilateral relationship had come into the focus after India's so-called Peaceful Nuclear Explosion from 1974, the plutonium having been produced in the Trombay nuclear reactor provided by Canada. The author has, correctly, termed the events of 1974 as but 'the final blow to the decrepit structure' (247) of an earlier assumed bridge between the two countries. His monograph provides interesting new insights not only regarding the bilateral relationship itself, but also into Canadian diplomatic history, the history of aid and that of international nuclear cooperation.

The investigation starts with contacts predating Indian independence in 1947 to turn toward efforts to establish a bridge between two members of the Commonwealth. The aid relationship, beginning with the Colombo Plan, played a key role in this. There were shadows cast over the resulting period of friendly collaboration when both countries became members of the International Commission for Supervision and Control of Indochina (ICSC), getting deeply entangled into Cold War controversies. In the following, Touhey focuses on the question whether there ever has been a special relationship between Delhi and Ottawa as propagated by High Commissioner Escott Reid, a central topic of the monograph. The Diefenbaker years from 1957 to 1963 showed a decline, intensified in the mid-1960s. Certainly among the most relevant chapters ranks the one around nuclear cooperation and the failed Canadian efforts to impose nuclear safeguards or make India sign the Non-Proliferation Treaty - a story of both Indian unscrupulousness and amateurish Canadian negotiation strategies. The monograph concludes with years of Canadian frustration predating the deep disappointment with the nuclear test, leading to a vacuum in bilateral relations lasting for full three decades.

The book provides great insights, in particular analyses of the surprisingly detailed Canadian assessments of Indian foreign affairs, triggering intensive discussions hardly found with any other of India's western partners. It is an extraordinary contribution to a modern diplomatic history as it highlights the important role of individual diplomats, officials and politicians in opinion formation and decision-making. Some readers might miss more of those aspects of Indo-Canadian relations, which have a strong multilateral aspect. The many problems resulting from working together with Poland in the ICSC have been given the great relevance they deserve - the bridge-concept came to clash with Cold War realities. There is, however, nothing to be found about the highly relevant Canadian contribution to the Aid India Consortium, among others taking care of a softening of conditions of loans of other donors, or Bonn selling former Canadian F-86 Sabre jets to Pakistan after the latter's defeat in the 1965 Kashmir War.

Certainly most disappointing, however, is that - notwithstanding the title - this monograph nearly exclusively focuses on Canada's India policy. It must be added in all fairness that this is only in minor parts the author's fault as Indian archives hardly provide any documentary on India's policy vis-à-vis Canada. Nevertheless, more than once the assessments of Delhi's intentions and actions cannot convince the informed reader. This is particularly true for the discussion whether for a while there had been a special relationship between the two countries. Touhey demonstrates in full detail that this was mostly wishful thinking by Reid, as far as the Canadian side was concerned. A more extensive investigation of Indian documentary - probably impossible in the framework of a PhD-thesis - would, however, have shown that those in charge in Delhi considered Ottawa a special friend and partner within the Western camp. Foreign Secretary Subimal Dutt for example, as unsentimental as a top official can be, confessed that he had 'not seen a single Canadian who is not nice and pleasant'. [1]

Nevertheless, Touhey's detailed analysis of the performance of Canada's high commissioners in Delhi tells an interesting story once put into context. In the early 1950s, there was no lack of western diplomats posted to Delhi admiring Nehru - Canadian Escott Reid, American Chester Bowles or West German Ernst-Wilhelm Meyer - who tried to pull their governments at home along. Notwithstanding such most sympathetic understanding, India's first prime minister together with his main advisor V.K. Krishna Menon due to their anti-Western reflexes managed to alienate nearly everyone in the West, all on their own.

Putting the findings of this monograph in a greater context is the general advice for the reader, too. Touhey's archival findings provide an excellent understanding of Canadian foreign policy, but disappointingly little about India's. That an author writing about India hardly cares about the correct spelling of Indian names or misdates even major events in South Asian history unwillingly tells a story. Read as a supplement to the growing body of literature around Indian foreign affairs, the monograph is of great value - the book alone will be somewhat misleading. It would also have added to the relevance of this admirably detailed work if Canada's India policy had been shown in the framework of similar efforts of other western countries beyond the USA.