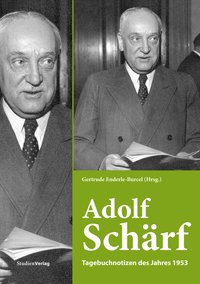 This meticulously edited diary of Adolf Schärf, Austria's SPÖ Vice-chancellor (and later President) provides unique glimpses into the internal life of post-war Austrian politics. It illuminates the every-day sphere which is largely absent from most political histories of the Second Austrian Republic.

This might at first sight seem an over-dramatic verdict on a diary which in many ways is a record of sheer banality: meetings convened, arguments conducted, possibilities explored, disagreements recorded, compromises agreed then withdrawn and (occasionally) decisions reached. But it is precisely this mass of ordinariness which takes the reader away from the conventional narratives. Schärf the diarist also provides a useful corrective to the earlier account by Schärf the politician but also to the tendentious and uncritical biography of him by Karl Stadler [1].

Four main themes can be condensed from the minutiae of the diary: Firstly it provides depth to the workings of Austria's post-war political system. This has been studied (and generally praised) by students of politics under a variety of headings from Proporzdemokratie, social partnership to "social corporatism". Whatever the usefulness of these labels Schärf's diaries remind us that at the core of the system was personnel politics, i.e. arguments about who should get what job, at what pay grade and last not least, what would be the pay-back for agreeing to an appointee from the other side of the political divide.

Secondly, and closely linked to this, is the functioning of the Grand Coalition of ÖVP and SPÖ which ruled Austria from November 1947 (when the communist party left government) to 1966. The events recorded here shed light on its first major crisis. After the SPÖ made slight gains in the elections of February 1953, a fraught and often confused period of negotiations started. The continuation of the coalition was far from self-evident. The ÖVP ostensibly advocated the inclusion of the smaller far right party VdU (Verband der Unabhängigen, the predecessor of the FPÖ) into a tripartite coalition but also flirted with the possibility of a "black-blue" coalition. The manoeuvres around this take up much of this book.

For Schärf that also meant adjusting to a change at the top of the ÖVP. Leopold Figl, the farmers leader who had been Austria's chancellor since 1945, was reportedly "von den Bauern fallen gelassen worden" (20 March). His replacement, Julius Raab, had been the power behind the scenes and now moved centre stage. From Schärf's perspective he was a prominent anti-socialist enemy of the pre-Anschluss authoritarian regime, which points to the central interplay of Grand Coalition politics: between basic suspicion and the need to nevertheless come to solid agreements.

The prospect of the VdU in government also sheds light on a third major topic of this diary, attitudes to National Socialism. The change at the top of the ÖVP is often seen as part of a transition from a "KZ generation" (Figl had been a prisoner in Dachau) to one with a more lax or - for its supporters - "pragmatic" attitude towards former Nazis. Raab's burgeoning deal with the VdU involved winding up penalties against the "compromised" (belastete) Nazi members and war criminals. For this reason but also because of the ammunition it could provide the Soviet Union the deal was opposed by West. US ambassador Llewellyn Thompson stressed that the rehabilitation of Nazis should not have priority over Wiedergutmachung (restitution and compensation) for Nazi victims. He told Schärf (23 April) that the negotiations between the Peoples Party and the VdU had "Österreich sehr viel geschadet ". In the end it was the opposition from the Social Democrat President Theodor Körner which was probably decisive; the Grand Coalition survived for another 13 years while the FPÖ had to wait another thirty years before it entered government (in coalition with the SPÖ).

Thompson was referring to the negotiations with the "Claims Committee", headed by Nahum Goldmann, which finally began in Vienna in June 1953 after years of procrastination. From the start the talks were dogged by party politicking: both Austrian main parties sought to shift the onus onto the other in two contrary senses; passing the buck for any agreement, which was bound to come under domestic attack, while also diverting foreign criticism of possibility antisemitism to their political opponents. Chancellor Raab reportedly told Goldmann that he had no wish to be pelted with rotten eggs when he went to America. Schärf himself objected to being portrayed as "einen Judenfeind" apparently on the basis of ÖVP press briefing. The framing of these manoeuvres was far removed from memories of Nazi rule or Holocaust. For Schärf the Austrian state was ready to "renounce" (sic) heritable property ("auf das erbliche Vermögen nach Juden zu verzichten") on the basis that this property did not in any case amount to as much as "the Jews" believed ("dass diese Vermögen nicht die von den Juden geglaubte Höhe erreichen") (19 June 1953, 103). At the end of the year Goldmann broke off negotiations accusing his Austrian counterparts of bad faith.

Austria's position as a country under four power occupation is the fourth main topic here. After several years of impasse State Treaty diplomacy was stuck in what in February Chancellor Figl called a dead-end ("Sackgasse") but Stalin's death soon afterwards raised the possibility of an exit route. Some Soviet relaxations (censorship, return of requisitioned buildings etc.) followed. While West German rearmament was progressing the question of Austria's position in the divided Europe began for the first time to be seriously considered. In a clandestine meeting with the Indian Prime Minister Nehru in Switzerland the Austrian foreign minister Karl Gruber tentatively discussed the idea of neutrality or "Allianz-Freiheit" and a tentative Indian mediation in Moscow followed. The SPÖ had observed the shift to a less hostile stance towards the Soviet Union with suspicion. Schärf was irritated being kept out of the loop but also, as an atlanticist anti-communist, worried about the repercussions in Western capitals. The year ended with cautious optimism about the impending resumption of talks at the Berlin Council of Foreign Ministers. By then Gruber had been replaced as Foreign minister by Figl, with the rising star of the SPÖ Bruno Kreisky as Staatssekretär for Foreign Affairs.

The four topics sketched here are, of course, not exhaustive. Other important issues include: the Catholic Church's role in education; taxation legislation; prices, wages and welfare provisions; corruption allegations related to Marshall Aid finance. Many of the footnotes on these and other topics are miniature masterpieces of condensation. They will provide excellent introductions for future post-graduate students and other researchers.

In her introduction the editor addresses allegations of Schärf's complicity as a lawyer in Nazi "aryanisation". While this volume sheds no direct light on the charge it does record Schaerf's indignant denial of the charge of antisemitism as a "Verleumdung [...] um auf mich eine besondere Pression auszuüben" (28 September). And more broadly it certainly backs up Enderle-Burcel's call for more solid empirical research rather than moralizing. In that sense this volume (and its companions) [2] especially when read in conjunction with the relevant cabinet minutes [3] should take us much closer to a much-needed new political history of post-war Austria.