Paul C. Dilley: Monasteries and the Care of Souls in Late Antique Christianity 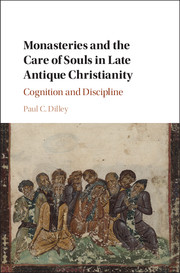 Paul Dilley explores the dynamics of monastic leaders' care for the souls of monks under their charge in the major communities of Upper Egypt. The title, then, is a misnomer. While Dilley accumulates selected evidence from monastic sources outside the confederations of Pachomius and Shenoute, it is by no means an exhaustive exploration of late antique monastic soul-care (which finds admission in the conclusion, 295). However, within that given Upper Egyptian framework, this is quite a good book.

Dilley argues "that the training of thoughts practiced by early Christian monks led to the gradual acquisition of a new and particularly monastic theory of mind" (14-15). This monastic theory of mind centered around five concepts: 1. that "the mind is permeable"; 2. that "thoughts [...] were of fundamental moral significance [...] and disciples were responsible for managing them with the help of an experienced counselor"; that this management 3. "required training one's imaginative capacities" and 4. "train[ing] their ear to internalize the biblical proclamations of monastic rhetoric, while ignoring demonic whispers"; and (5) "that God was aware of their private thoughts, which were also known to certain inspired saints" (15).

To support his argument, Dilley spends seven chapter demonstrating how "[t]he care of souls in cenobitic monasticism was an elaborate process of instruction, discipline, and ritual with the goal of salvation, which placed leaders and disciples in a reciprocal relationship of obligations" (2). The first two chapters address the instruction received by potential monks, the possible internal and external obstacles to their receiving soul-care, and the various ways in which potential monks were tested.

The middle three chapters outline the major "cognitive disciplines" that helped instill the monastic theory of mind in monks and were essential in the care of souls (15): audition, visualization, and locution. Audition allowed monks to hear the words of God through reading or writing scripture, which necessitated a program of monastic education, or through listening to their monastic superiors (chapter three). Visualizing the punishment of sinners developed the fear of God in monks at every stage, allowing them to fight temptations and demonic assaults (chapter four). Locution (chapter five) builds on audition by turning God's monologue through scripture and monastic teachings into a conversation in prayer between monks and God. For less advanced monks, God's response to this conversation could come in the form of affecting the conscience, reminding them of scripture or teachings, or bringing images into their minds. Monastic leaders received special revelations from God about the state of souls under their care.

The care of souls, however, was not isolated just to individuals, either on their own or in teacher-discipline relationship withing the monastery. In the final two chapters, Dilley explores the communal rituals of soul-care. These were yearly meetings through which leaders of the monastic federations of Upper Egypt could address the souls of all collectively and enforce group cohesion through communal repentance or exhortations to unification.

Dilley describes his approach as "cognitive historicism," drawing on cognitive science (especially cognitive anthropology) and new historicism [1] to develop a mode of reading ancient texts for and through their affective dimensions in order to infer the monastic theory of mind (10-15). He also deploys comparative research to support his ideas of monastic cognition, demonstrating that certain modes of thought are not isolated in time and space.

This is an intriguing theoretical approach, but the comparative studies and the cognitive anthropology and psychology make only scattered appearances throughout the chapters. Instead, Dilley is at his best when interpreting the material from Upper Egypt. The way he reads and connects these texts together is nothing short of excellent, and he is careful to pay attention to concerns about different genres while not requiring such categories to determine his interpretation.

The most useful part of Dilley's theoretical approach is in establishing "theory of mind" as an analytic category for monasticism, allowing him to argue that monks had a distinctive theory of mind. While further work on late antique theories of mind would be required to fully support this distinctiveness, overall, his argument is convincing.

Indeed, around p. 105 I found myself frustrated with his contention that the cognitive disciplines are primary. Was the intense physical labor of the ascetic life at best secondary to the real work of the heart, and at worst nothing more than, as Dilley sometimes puts it, "hazing"? By the end of the book, I was convinced that at least in the Koinonia and White Monastery federation, everything was subordinated to the cognitive disciplines that made up the art of soul-care and developed this distinctive late antique monastic theory of mind.

Thus, the book's greatest strengths lie in Dilley's ability to read the ancient sources and develop from them a theory of mind, more than a millennium after these individuals dried up in the Egyptian desert. This makes his work a substantial contribution to scholarship on the White Monastery federation and the Koinonia, monastic education, and the cognitive science of religion. His book is also a model for applying cognitive science to the study of late antiquity.

The weaknesses are mostly minimal. There is some idiosyncratic language use, for example interpreting "guard your eyes" in monasticism as a prohibition against eye contact (199). Either Dilley misreads the visual prohibition, which includes looking at plants or nature in such sources such as the Apophthegmata Patrum, or by "eye contact" he means looking at anything instead of two people looking at each other. There are also a few issues of copy editing; these are not just isolated to the notes [2], as in some books, but find their way into the body of the text. [3] It is also unclear why and when Dilley includes transliterations of specific Greek and Coptic words, or why he includes certain linguistic asides (e.g., 85-86) that do nothing for the overall argument. These are minor enough, though, and do not detract from the intellectual quality of Dilley's work.

A more substantial weakness likely lies in the transition of his scholarship from dissertation to published monograph. The inclusion of monastic sources from outside Upper Egypt (e.g., the Rule of the Master, Augustine, the Cappadocians, and selected Palestinians) feels, at times, shoehorned into the overall argument. They are used comparatively with little or no view toward social, environmental, cultural, economic, etc., conditions that differed from those found in Upper Egypt. Indeed, Dilley does a better job drawing out the differences between the two Upper Egyptian confederation and between different generations of leaders than he does in differentiating the outside literature geographically or temporally.

Overall, this is an excellent book that provides a new look at the monasteries of Upper Egypt and, more particularly, the interior lives of those monks. The book is expansive with many quotations from the relevant literature and very insightful readings of the texts. Dilley's writing is engaging, his is argument persuasive, and the book is a good contribution to monastic and late antique scholarship. Moreover, it is a model for future interdisciplinary scholarly endeavors and for bringing the social sciences into conversation with the humanities.